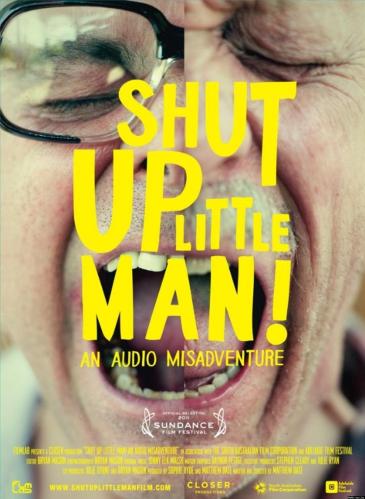 Like listening in on people who are unaware? Enjoy hearing the arguments that happen everyday across this country? Do you like the sounds of homophobic slurs and incessant swearing? Go ahead and enter, if not, I’d pass on this “misadventure”.

Shut Up Little Man! is a documentary following the exploitation of two grumpy old men, Raymond Huffman and Peter Haskett by two young men, Eddie Lee Sausage and Mitch Deprey in 1987. The two young men resided next to Ray and Peter, and preceded to record around 9 hours of their alcohol fueled arguments. The cassette tapes would be passed along, and before the internet existed, the world had a meme on its hands. Filled with ridiculous dialogue and sometimes unrecognizable yelling. What it spawned was comic books, a play, and a race to make a major motion picture. However, we also get to see some of the dark side, from the nature of the two men’s relationship, to some of the bitterness still felt, SULM is not all raunchy laughs.

Honestly, I’m not quite sure I started watching this. The main culprit was probably the intriguing poster which kept showing up on Netflix. Whatever the case was, I wish I hadn’t started it. Besides the questionable nature of the recording without permission, at the end of the film I just felt dirty and felt really bad for these old men. The rest of the film seems to go nowhere, with many of the same clips being played over and over again. Although it was already a short 90-minutes, Shut Up Little Man could really be condensed to a 20-minute short.